New Barrett’s Esophagus Research May Assist in Diagnosis and Treatment 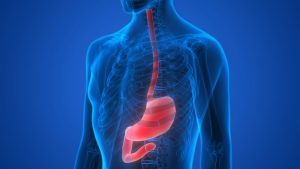 Overexposure to gastric acid causes cellular changes in the esophageal lining, and this can be a precursor to esophageal adenocarcinoma.

A team of researchers from Columbia University Medical Center (CUMC) recently made an exciting discovery: the “cell of origin” for Barrett’s esophagus. Jianwen Que, M.D., Ph.D., associate professor of medicine at CUMC, and Ming Jiang, Ph.D., associate research scientist in CUMC's Department of Medicine, led the study. Using genetically altered mice that were predisposed to Barrett’s esophagus, the research team examined the gastroesophageal junction tissue for changes. The gastroesophageal junction is a specific place where the esophagus and stomach join, and this area is especially susceptible to GERD inflammation and damage.

Dr. Que and the team discovered an area of the gastroesophageal junction that had a high concentration of unique basal progenitor cells. These cells are similar to stem cells and can specialize into various types of specific cells.